You Are Here: Patent of the month November

Patent of the month November 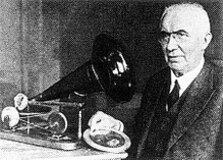 Patent of the Month November – The Record player turns 135

From the invention of the gramophone at the end of the 19th century right to vinyl’s 1970s peak, records and record players were the most important medium to bring music into homes! Displaced in the course of digitalization by more convenient CD players and later by MP3 technology and streaming providers, the record player is experiencing an unexpected renaissance with a new lust for the analogue. The technology of lateral sound recording was developed by the German-American businessman and inventor Emile Berliner. On 8 November 1887, exactly 135 years ago, his “Gramophone” was patented with the number US372786A in the USA – our patent of the Month November!

The dream of humankind to collect sounds and replay them is actually very old. As early as the late 16th century the Italian physicist Giovanni Battista della Porta pondered a solution yet the technical possibilities of the age proved insufficient. It wasn’t until 300 years later that the famous inventor Thomas Alva Edison succeeded in recording and reproducing sounds with the help of tin foil wrapped around a grooved metal cylinder. He patented the so-called "phonograph" in 1877, ten years before Berliner. However, with this technique, no further distribution was possible; each cylinder had to be processed individually.

Emile Berliner was a German-American inventor and merchant. Born in Hannover in 1851, he emigrated to the USA in 1870 to escape conscription into the Prussian military. As a businessman, what bothered him most about Edison's phonographs was the cumbersome and costly duplication of the cylinders for a wider market. Aiming to improve the state of the art in this respect, he conducted experiments with the phonograph over several years in the makeshift laboratory he had set up in his flat. In 1887 he achieved the final breakthrough by altering the angle between the needle and the carrier foil by 90 degrees. He thus developed a method of recording sound vibrations laterally rather than vertically, as a physical deviation of a spiral-shaped groove, engraving it into the surface of a rotating disc.

In accordance with the contemporary preference for Greekisms, he called the playback device he developed for this purpose "gramophone", which roughly translates as "written in sound". This marked the invention of the precursor to the record player. It is actually a double development, because Berliner also invented the associated disc-shaped sound carrier and named it “record”, a term still in use today! For this purpose, the inventor first worked with a glass plate coated with soot, which was then chemically hardened for further treatment. He soon replaced the glass plate with a zinc disc covered in wax. By immersing it in an acid bath, the grooves stamped in the wax were etched into the zinc. After removing the wax, a stable, metal "master plate" was obtained, which was available for the production of pressing moulds.

When playing these records, loud background noise made this model unsuitable for music preservation. Berliner kept researching and finally began to experiment with a mixture of shellac, rock flour, soot and plant fibres. This led to the shellac record in 1895, which held its position in the record industry for almost 50 years, until the first vinyl records came onto the market in 1945.

In 1889, he launched industrial series production of the shellac record and perfected it until around 1910, for instance by gluing on paper labels and writing on both sides. He founded two gramophone and record companies in the United States, followed in 1898 by the Gramophone Company in London and the “Deutsche Grammophon Gesellschaft” in Hanover. The latter was the first company to produce records exclusively, thus founding a new branch of industry.

The Patent and Standards Centre wishes a resounding success for your ideas!