Patent of the month September 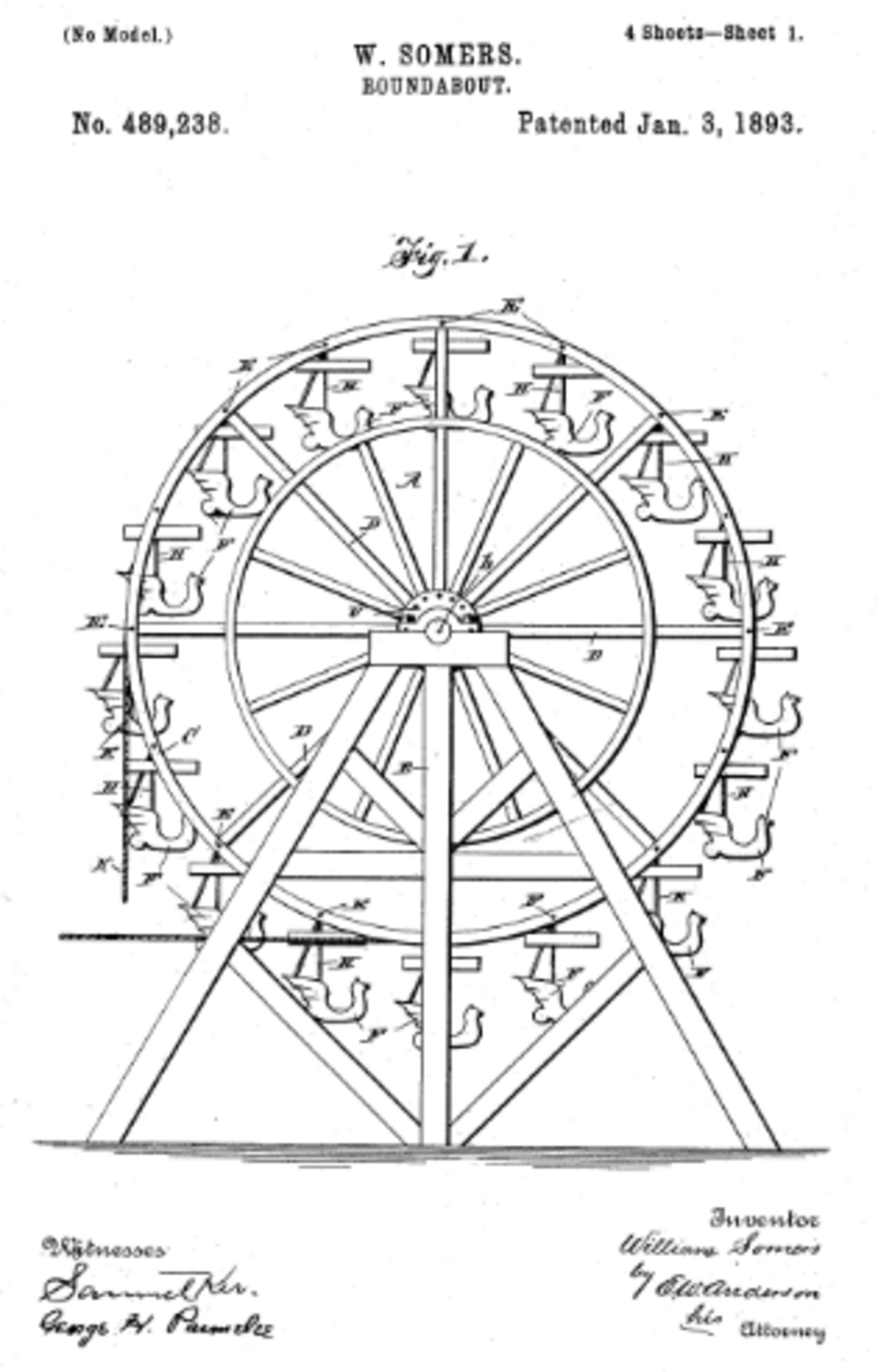 The Ferris Wheel – America’s answer to the Eiffel Tower

When a Ferris wheel rises from the Katschhof in Aachen, visible from afar, people of the city know, that it is time for the September Special again! There are many attractions throughout the city on that occasion: Music, entertainment, stall magic, etc. Popular landmark of the event is the Ferris wheel, which provides a view of the city from a lofty height. However, who actually invented it? The idea for this comes from the USA. The first patent on a Ferris wheel was filed there in January 1893. The patent specification US489238A, simply titled “Roundabout” and filed by William Somers from New Jersey, is therefore our Patent of the Month September!

Today hardly anyone knows the name Somers or his invention, which consisted of a wooden, vertical carousel, that was an unspectacular 50 feet high - even the inventor considered it boring. The construction, which he called “observational roundabout”, was first set up in Atlantic City in 1891 and was very popular. In its second season, the wooden structure caught fire and burned down. Besides the fire hazard, the roundabout had another disadvantage: it was very noisy! The coal-fired steam engine emitted so much noise and exhaust fumes that neighbours complained to the city council.

Regardless of the successful patenting, another person went down in world history as the inventor of the Ferris wheel: George Washington Gale Ferris from Chicago! He designed a far more spectacular construction, after which the large fairground attractions are still named today. Rise and fall of the young railway engineer with his ground breaking invention at the time of the great stock market crash of 1893 is a story worthy of a Hollywood film adaptation!

The organizers of Chicago World's Columbian Exposition of 1893 were desperate for a prestigious object to outshine the Eiffel Tower, which had been erected in Paris four years earlier. Under the motto "Make no small plans", they called for sensational ideas. And Ferris, who was well aware of the technical details of Somers, delivered. At first, his plans for a steel wheel powered by steam only earned him headshaking. Yet "the man with the wheels in his head", as he was mockingly called, prevailed with a lot of insistence and self-investment, and his invention became a real sensation: with an axle weight of 45 tonnes, he built the largest Ferris wheel in the world until then! The spokes of the steel monster were 76 metres long. They carried 36 gondolas that could transport up to 2000 passengers at a time. The Ferris wheel was a huge triumph and the goal of outdoing the Eiffel Tower was achieved.

Things went downhill for Ferris from then on. First, Somers sued him for patent infringement. He won the legal dispute, but never filed a patent of his own. It may have been the first faux pas in a series of bad decisions, because unlike his competitor, he was never commercially successful with the Ferris wheel. Disputes and lawsuits with exhibitors drove him to financial ruin, so that he finally had to declare bankruptcy. He died in Pittsburgh on 26 November 1897, lonely and impoverished, at the age of just 37. His original Ferris wheel also came to a sad end. In 1904, it was set up once again at the Louisiana Purchase Exposition and thrilled people there one more time. After the exposition, the demolition company went bankrupt and simply left the wheel standing, much to the annoyance of local residents. After two years, the "eyesore" was blown away with 200 tons of dynamite.

However, the invention was still patented and that by James Graydon, a frequent inventor and patent applicant. Already in September 1893, he applied for a patent for an almost identical Ferris wheel in Great Britain (GB189318007A). Lack of novelty apparently went unnoticed by the examiners at the time. Graydon sold his rights to the British Walter Basset, a wealthy retired British naval officer, who installed the first Ferris wheel in Europe at London's Earls Court fairground in May 1895. From there, the fairground attraction began its worldwide journey of triumph and has become an indispensable part of the cityscapes of famous metropolises.

The Patent and Standards Centre wishes your ideas high flights of fancy!

History of the ferris wheel and William Somers

We call it the ferris wheel but is it