You Are Here: Green Road 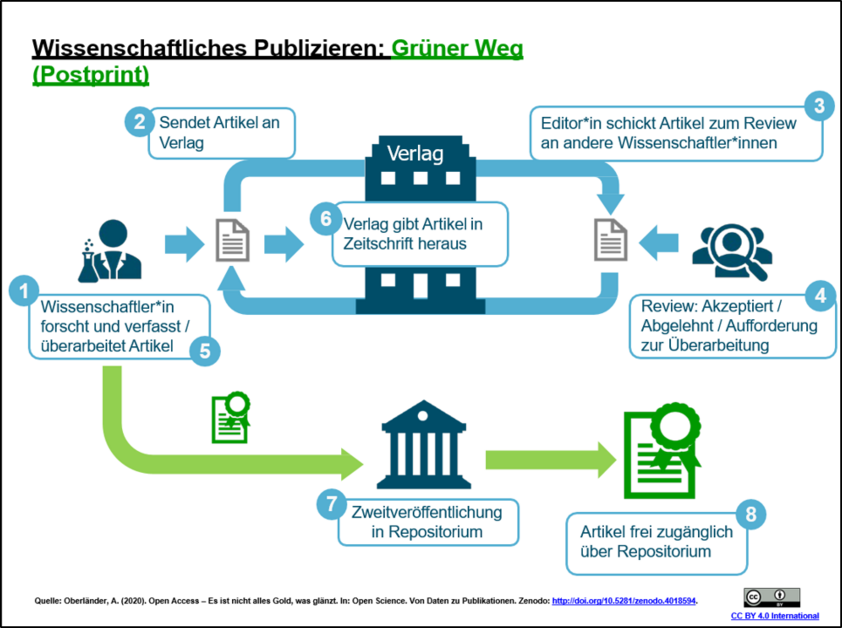 In this model, which is often also referred to as "secondary publication" and "self-archiving", scientific works that have been published according to the traditional publication model (closed access) and are therefore not available free of charge and without restriction are published a second time.

The second publication takes place in open access, usually on (non-commercial) institutional or subject-related repositories, but can also take place via the author's personal website or via his/her institute or employer website.

However, publishing via an institutional or subject-based repository offers significantly more advantages, such as a proper standardized bibliographic record, the assignment of a Pesitent Identifier (e.g. DOI), services such as comprehensive advice and support during the publication process, or even the aspect of long-term archiving.

Many publishers now allow secondary publication, but often only under certain conditions, which are listed in the author contract and/or in the respective sharing policy. The most important requirements include:

With many publishers, secondary publication is only possible after a certain embargo period has elapsed from the publication of the final contribution. This period can vary from publisher to publisher, but also from journal to journal. In some cases, for example, the embargo is six months, in others twelve or 24 months, and in still other cases even more. Sometimes, however, publishers allow a second publication without an embargo, so that the second publication can also take place parallel to the first publication.

Note: Some research funding bodies now stipulate that the research results obtained as part of the funded project must be published in open access - if not immediately, then at least within a certain period of time. In these cases, some publishers' policies provide the option to shorten the actual embargo period accordingly. For other publishers, this option does not exist. In such cases, the only option is then to freely purchase the corresponding article in Open Access (Gold Open Access) immediately or still subsequently directly via the publisher against payment of an -> APC or -> BPC.

Version of the contribution:
Many publishers do not usually allow the use of the final published PDF document (Final Published Version) for secondary publication. Instead, either the "Accepted Manuscript" may be used, i.e. the version that already contains all possible additions, changes and corrections resulting from the peer review process, and/or the Preprint, i.e. the version that the author has submitted to the publisher for acceptance. Different embargo periods may also apply in each case (in the case of the preprint, these may not apply at all, or in many cases, advance publication of the preprint is also possible).

Location of secondary publication:
Many publishers regulate in detail where (repository, website, etc.) and when a contribution may or may not be made available in which manuscript version. For example, some publishers prohibit the second publication of the article on commercial repositories, etc.

Independent of the regulations in the publishing contract, the reformed Copyright Act also offers you the possibility to publish your work online after one year, provided that certain conditions are met. The regulations apply to author contracts from 01.01.2014. The text of the law states:

The UB Open Access team is pleased if you would like to publish your article twice on RWTH Publications. We will be happy to check for you the possibility of a second publication as well as the sometimes complex conditions and requirements on the part of the publisher (such as whether or not there is an embargo period, which manuscript version may be used for the second publication, etc.) and, if necessary, also request the rights for you.

Sometimes publishers also allow parallel publication on a repository. This variant is particularly suitable for the publication of independent publications (books). The publication takes place both via a publisher and - in legal agreement with the publisher - in parallel on RWTH Publications. Here, too, the UB's Open Access team will be happy to support you.