You Are Here: Patent of the Month December

Patent of the Month December 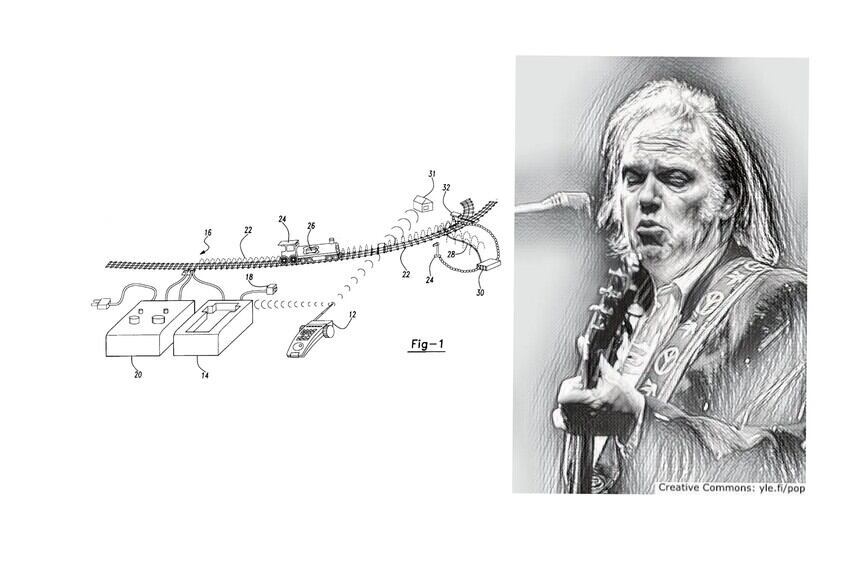 Most of us are familiar with Neil Young, „Godfather of Grunge “, songwriter and political activist. Less well known is the fact that the Canadian musician is also a successful inventor. As a die-hard model train enthusiast, he invented a remote control to make the hobby accessible to his motor-impaired son. In 1993 he applied for a patent in the USA under the title "Model train controller using electromagnetic field between track and ground" (US5441223A). Fathers, sons and model trains –a suitably heart-warming story for Christmas time - and thus our Patent of the Month December!

Many things can be said about Neil Young: The rock legend has received several Grammys Awards, the Rock& Roll Hall of Fame inducted him twice (as a member of Buffalo Springfield and as a solo artist), and he produced more than forty studio releases as well as numerous live recordings, as both a solo artist and in collaboration with many other artists. As an avid model train lover, he is also the co-inventor on seven model train-related U.S. patents. The spark was set off when Neil Young received a train set from his own father for Christmas at the age of five. He now owns huge model railway collections, set up in a 3,000-square-metre barn on his property.

Young's son Ben, who was physically handicapped due to cerebral palsy was unable to fully participate in the game with the models. This inspired Young in the early nineties to develop the first remote control device for model trains. On the one hand, the innovation described in his first patent was the ability to start and stop the train at the simple push of a button, which had previously only been possible via electric wires. Additionally, an amplifier in the locomotive and an electromagnetic field in the rail environment provided the transmission of various control signals.

Through his invention, the model train manufacturer "Lionel LLC" took notice of the musician and made him a partner. Young's "Big Red Button" remote control became the company's hallmark. Other inventions by the musician followed, including an advanced sound system and new types of smoke units for the locomotive to make the overall experience more realistic. His designs and inventions helped pull the company out of bankruptcy in 2008.

„Long May You Run “- The Patent and Standards Centre wishes you a merry Christmas!

Video: Lionel – Only the Beginning