Patent of the month of July 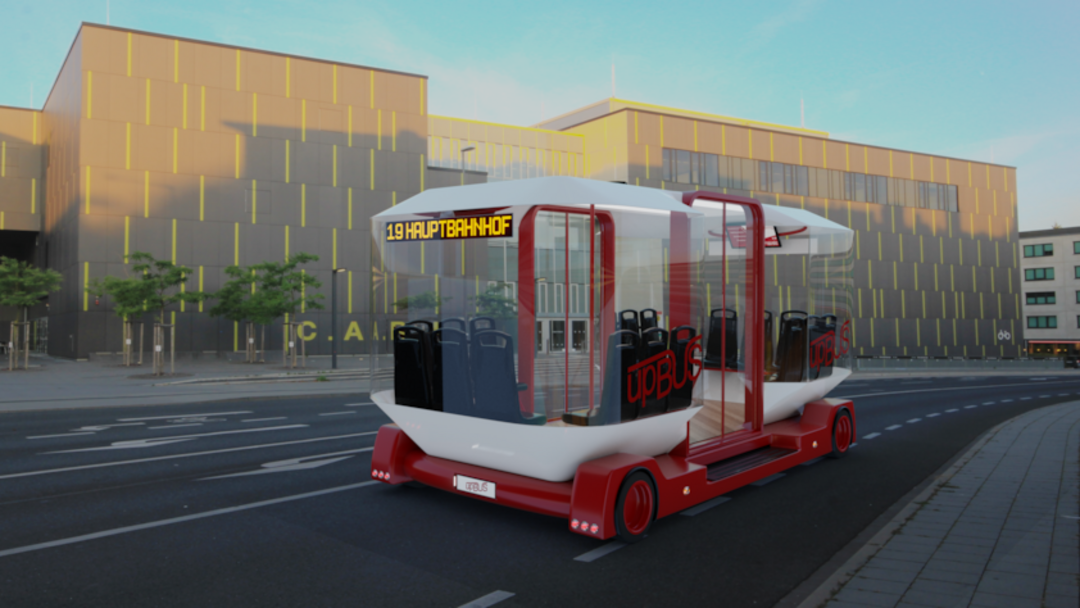 Who has never dreamed of simply taking off in slow-moving city traffic? This futuristic vision could soon become reality for public transport thanks to a development by  upBUS UG.

Their hybrid mobility concept, in which a vehicle alternates between autonomous bus operation and a cable car, is designed to get traffic flowing again - not to mention quite low in emissions. The technology for the smooth transition between bus and gondola has been filed for patent by the RWTH spin-off at the German Patent and Trademark Office in 2019.

Hence, the publication entitled "Means of transport and cableway for an exchange process" (DE102019006296A1) is our patent of the month July!

In Germany, cable cars are rather exotic as regular means of transport, although they can be built quickly, are economical to operate and independent of other traffic. Reasons for this are various restrictions. For example, they are not allowed to fly over private property or cultural assets worthy of protection, such as Aachen Cathedral, and they need space to enter and exit and an entry lane.

However, in Costa Rica, the home of upBUS co-founder Mauricio Chaves, the so-called sky trams are part of the everyday cityscape in public transport.

Inspired by this, the former PhD student at the Institute of Structural Mechanics and Lightweight Construction (SLA) started on the flying bus project in 2019, together with Tobias Meinert, Eduard Heidebrecht and David Bierbüsse, who also worked at SLA and at the Chair of High Frequency Electronics (HFE).

The resulting innovative system consists of a passenger transporting cabin and is able to couple with both an autonomous driving module and the suspension of the cable car. The passenger cabin can therefore function either as a bus or as a gondola. Passengers can use both systems without changing. For the switch from conventional road operation to cable car operation, the passenger cell and the driving module must be separated from each other. For this purpose, the driving module is equipped with a lifting device. It lifts the passenger compartment - similar to a hoist - in such a way that the coupling elements of the cableway hanger and the cabin roof are subsequently aligned and stably connected to each other.

The control of the coupling process, accurate to the millimetre, requires a precise analysis of the vehicle's surroundings. The required data are collected and processed using sensor technology integrated in the driving module, e.g. by radio-based positioning or optical distance measurement. To ensure that docking works, the spin-off also counts on a technology that has previously been developed as part of a major interdisciplinary research project with significant participation by the SLA and other RWTH institutes. This is a standardised interface for transmitting information, mechanical loads and energies. The principle of transmodular coupling has been developed since 2010 in the iBOSS project for completely automated coupling of small space satellites. Because of its space aspect, the German Aerospace Center (DLR) funded the development of the first upBUS prototype as part of its "Innospace" technology transfer programme.

What happens next? Prototype testing is planned in cooperation with a major cable car manufacturer and the TÜV (German Technical Inspection Agency) in order to shorten subsequent approval time. Various scenarios are conceivable for application of the upBUS, e.g. in urban transport. In Aachen, for instance, the central campus of RWTH Aachen University could be elegantly connected with the outlying districts.

Funders are urgently sought for financing a prototype suitable for public use. This is more difficult than one might expect, because venture capitalists are currently concentrating on IT start-ups and funding bodies tend to support rather manageable projects such as the expansion of cycle paths. However, the founders are in dialogue with some municipalities; the most far advanced negotiations are with the city of Trier, which has even commissioned a feasibility study.

The innovation also offers potential for possible clients in industry, e.g. for connecting factory halls or company premises. Moreover, it is easier to obtain permits for the transport of goods. In 2023, the first track open to the public is planned to be built at the Federal Garden Show in Mannheim.

Project description from the Institute for Structural Mechanics and Lightweight Construction (SLA):