You Are Here: Patent of the month December

Patent of the month December 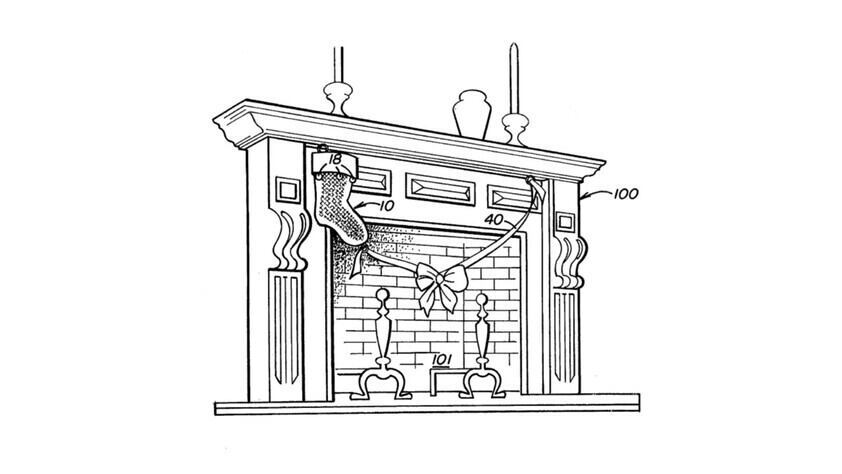 While for some people the Christ Child brings the Christmas presents, Santa Claus takes care for the others. The latter has to squeeze through the chimney on his way into the house. But how can you be sure that he has really been there? For all children who wish to know, we recommend the "Santa Claus Detector", an invention by Thomas Cane. He filed it for patent in the USA in 1994 under US5523741 - our patent of the month of December!

This "Santa Claus Detector" is quite a simple construction. It comprises a Christmas stocking, that is hung on one side of the fireplace and a pull cord, that is attached to its other side. When Santa comes down the chimney to enter the room, the cord is pulled and the lights on the stocking are activated.

In Germany, there is a clear regional division of which Christmas figure brings the presents: In southern and western regions, it is performed by the Christ Child; in the North and East by Santa Claus. Thereof one could derive the correlations - Christ Child means Catholic, Father Christmas means Protestant. However, this has not always been the case!

In medieval times, none of the figures were known. Gifts were given to children on the "Day of Saint Nicholas" (6th of December) or on the "Day of the Innocent Children (28th of December). This changed in the 16th century, when the reformer Martin Luther invented the Christ Child in order to undermine the worship of saints. Instead of St. Nicholas, God was to enter as "Holy Christ", and the gift-giving ceremony was postponed until 24th of December. Over the years, the abstracted figure of God evolved into the "Christ Child" - a female figure with angel wings, influenced by elements of the Annunciation Angel, Saint Lucia and Mary.

For Catholic children, St. Nicholas continued at first to be responsible for giving presents.

During the 19th Century, the figure of Father Christmas evolved from it. In Germany it became popular through Hoffmann von Fallersleben's publications and gradually replaced the idea of the Christ Child in sophisticated Protestant families. In turn, as a result of harmonisation of customs and declining importance of religion, Christ Child, together with the Christmas tree and the Advent wreath, also found its way into Catholic households.

In the USA, Irish and Dutch immigrants ensured the spread of St. Nicholas as "Santa Claus".

The image of Santa that we are familiar with today was mainly influenced by a marketing campaign by Coca-Cola. With his big bushy beard and typical red-and-white clothing, he lost all religious significance and became the epitome of Christmas gift-giving. No surprise that the Santa Claus patents were filed in the USA!

By the way, for those who want to continue playing detective with their kids to find "evidence" for Santa's activities, the "Santacam" is recommended. Filed for patent in the USA in 2011 under US2011234850A1 the device allows to record pictures of Santa (or Christ Child or even Easter Bunny)within the family environment.

The Patent & Standards Centre wishes a fabulous Season and a Merry Christmas!