You Are Here: Patent of the month August

Patent of the month August 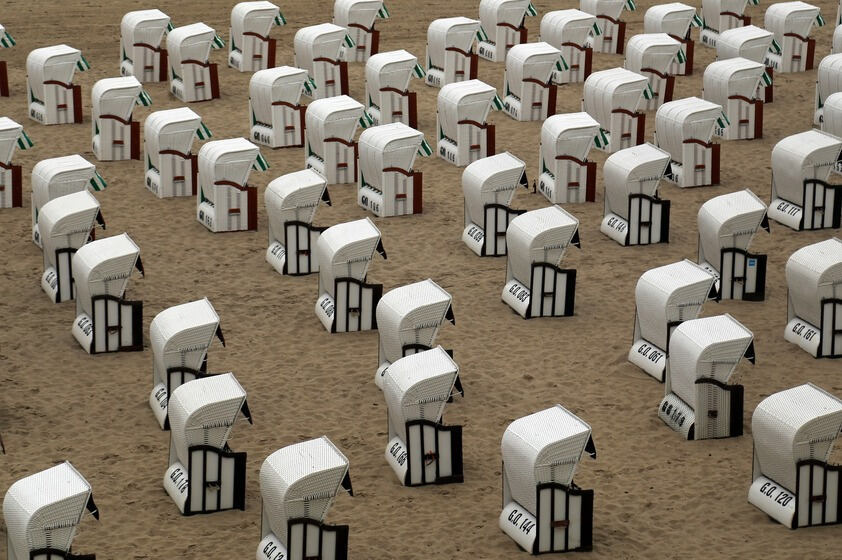 Indispensable from German coasts: the Strandkorb! As a comfortable retreat for almost any weather, it is an integral part of German beach culture and in terms of the corona pandemic the ideal spacer. The construction and external appearance have not changed since the introduction of the first prototype, even though there have been several suggestions for improvement throughout the patent history. One of the latest technical solutions, for which a utility model application under the title “Strandkorb” was filed with the DPMA in 2017 (DE202017101563U1), enables Strandkorb owners to be more mobile and independent of location - our „small“ patent of the month of August!

The further development of the classic design described in our utility model – colloquially referred to as „small patent“ – provides for a demountable construction and side windows. The inventor has designed a Strandkorb kit consisting of separate frame and upper basket parts, allowing the Strandkorb to be disassembled. The otherwise very inflexible, chunky behemoth can be sent as a package or be transported in a car this way. The additionally proposed acrylic glass side windows allow curious glances at the surroundings – this way, the Strandkorb occupants are still well protected but can follow what is going on in their surroundings and make contact with the outside.

However, the success story of the original type, which was sighted on the Baltic Sea in the early 1880s, is not a patent story. Early forms of canopied furniture, which mainly served to protect against draughts in large and cold living rooms and corridors, had already been handed down in the European basketry trade by the end of the 16th century.

The first written documentation is found in the pattern book of the basket manufacturer Ernst Karl Nikolaus Freese, published in 1871. But it was not until 10 years later that the court basket-maker Wilhelm Bartelmann is said to have set up the first beach chair in Warnemünde.

The story behind this: Bartelmann received an enquiry from a lady suffering from rheumatism, who wanted a protective seat to enjoy her stay at the beach despite her illness. Bartelmann supplied a one-seated beach chair with a cover made of wicker, covered with fabric. His wife Elisabeth recognised the potential of the beach furniture in the booming tourist industry and was the driving force behind the spread of the Strandkorb along the German North Sea and Baltic Sea coasts.

Meeting the increasing demand, he modified his first design, which still had many similarities to Freese's pattern, into a double-seater, equipped with an awning, footrests and side tables. In this design, he provided the prototype for all subsequent variants, and is hence rightfully regarded as the inventor of the beach chair. However, Bartelmann never patented his design. One may speculate about the reasons. Did he simply forget about it or did he not believe in the patent system? He was economically successful anyway, thanks to good marketing by Elisabeth Bartelmann!